You had to be there

Me: (handing over empty take-out salad container) "That was awful."

Me: "What kind of pie has lettuce and cabbage and carrots?"

Jumping in with both feet

So I find out I'm pregnant, get sick, and immediately lose my mind. It's just a sinus infection. Granted, it's the worst sinus infection I've ever had...because I can't take a damn thing for it...but it's not like I have the plague or anything. But the thoughts still creep in.

Yeah...you get the idea.

And I know it's me...it's totally me. I'm a complete freakshow. I can't just be normal...think normal...feel normal.

Hang tight, try not to despair, and I'll see you soon.

Seriously...try not to despair. That is PERFECT! That is EXACTLY the kind of thing someone should say to someone like me after "congratulations." Don't try to be cute or hopeful or positive...just call it like it is...

~Work update...I think this email pretty well sums it up...

"Does anyone have a Hewlett Packer printer cartridge 15-X for an HP LaserJet 1200 B &W printer that I could borrow until I receive a new budget appropriation in 2010? If I don’t need it by then, I’ll return it to you unopened."

But I'm still taking two weeks off to care for the boys while they are on their vacation(s).

~The big kid continues to not get his work done in school. I asked him the other day how many people get 110% on their practice tests and he said, "Me and maybe a couple other kids." I am convinced he is just not being challenged.

~Myles is great...always sniffling or coughing from the latest creeping crud he's bringing home from daycare. We had absolutely NO idea what to get him for Christmas until yesterday. We even considered going to Best Buy and offering a couple bucks for a refrigerator box. I mean, really, he'd LOVE it! But we found some things while aimlessly wandering in Toys R Us...Hopefully he'll like them.

~There is other family drama, but it's not my story to tell. So I'm just going to say I hope the love will get through and inspire someone to get better.

~We had a small holiday party for the APL at the house. It was fun. My house got cleaned. Yay me!

~Oh yeah...I got a positive home pregnancy test on Christmas Eve Eve. EDD is 8/28. I don't know how much I'll be blogging. Probably more as I get more freaked out. (sorry Shanna...I am in a state of shock. I told Steve, then my family, and then we posted on Facebook. It was the easiest way to go to avoid having to talk about it just yet.)
- December 27, 2009 10 comments:
Email ThisBlogThis!Share to TwitterShare to FacebookShare to Pinterest
Labels: Daily life and other stuff, Little Bug

Sometimes they amaze me

Went to Niagra Falls and all I got was...

So yeah...we went to Niagra Falls. God, what is wrong with me? I can't write in a more timely manner? I think I'm beginning to see where my son gets his poor work habits...

Niagra Falls. If you are a facebook friend then you probably were able to piece it all together. If not...the highlights...

Drove through PA, stopping at Wegman's for carryout sushi for lunch. Wasabi! (A reference for Sam who enjoys that silly I Survived A Japanese Game Show)

Found the Buffalo airport and located the beautiful Kathy McC's luggage without incident.

Drove around looking for an ATM because neither Kathy or I knew if our ATM cards would work in the ATM machines in Canada. What? So we're new at this international travel business.

Toured the University of Buffalo...or Buffalo State...I can't remember. Nice campus. No ATM to be found.

Drove across the rainbow bridge and laughed like loons (come to think of it...there was quite a bit of loony-like laughing during the weekend). "Isn't the rainbow bridge where your dead pets go?" It was funny at the time...guess you had to be there.

Met the most uptight border patrol crossing guard. Kathy said he was an ass. I tend to agree. He asked us how we knew each other and I SO wanted to say, "We've never met before...we've just talked over the internet...and we're following the directions given to us by another person we've only ever talked to over the internet." But since I didn't think Kathy wanted to visit Guantanamo Bay, I just said we were friends.

Through a series of hilarious misunderstandings, ended up in the wrong house. Watched the Star Wars meets 700 Club episode of SouthPark.

Found the correct house with the help of the landlord. Called Ann and Jen laughing hysterically...they thought we'd been drinking. I was kinda afraid they might change their minds at this point and not show up...we were kinda scary. But they did, and we all went for a walk in Niagra Falls...on "the hill." My advice...stay away from the hill. It's like the Vegas strip with the neon lights and loud music and wax museums and freak shows...only it's on a hill. Very unpleasant.

Had dinner at the Cockhouse. Kathy McC exhibited her stellar reading skills here and transformed the Cookhouse into something seedy. But since they had crappy food and even crappier drinks, seedy works for them. Plus, there was this weird guy staring during the meal...so this establishment earned its name. And since it makes us giggle every time we say it, Cockhouse works for us.

After that it was pretty much a blur of good conversation, these amazing cookie dough truffles made by msfitzita (who sent them along even though she sadly was not able to make it...how awesome is she?!?!), wine, and relaxation.

There was (some of this I real-time tweeted) an Elvis Costello look-alike at dinner one night, FABULOUS apple martinis, wax museums, pork jerky, Cher, mullets and poutine.

There was afternoon naptime.

There was learning of the AWESOME habit of rinsing with vodka (which more than one of us have since tried, I'm sure).

There was Wayne Gretzky wine and an insanely overcrowded Christmas shop.

There was the LOUD sound of the falls on the front porch at night...and the helicopter buzzing overhead during the day.

There was the overly-friendly guy on the roof of Cash For Gold.

There was a lovely winery and a hat that "just wasn't meant to be."

There was authentic military simulation and the old lady at the pharmacy who knew EXACTLY where the nearest liquor store was.

There were weird dreams of strangers breaking in in the middle of the night...and checking to make sure they hadn't stolen the wine (a girl has to have priorities).

There was a lovely Perkins breakfast.

There was Kathy McC's fancy iPhone getting us un-lost after visiting THE most crowded outlet mall EVER.

Yeah...Niagra Falls is WEIRD. But I had an amazing time getting to visit with the ladies from the blogosphere. We shared some laughs that felt really good. But more than that, I really felt free to be me...in a way I haven't felt since May 11, 2005.

(Yes, this post requires a picture. So here we are...the only group shot of the weekend I think. And yes, I stole it from Kathy...thanks Kath!) 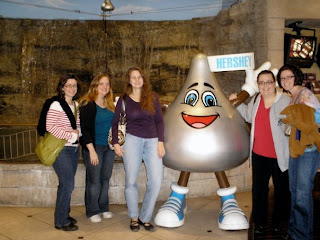 Despite our appearance in this photo, we had a good time. In fact, we had such a good time, I would like it to become a yearly tradition. Or at least try it one more time.

Who else is in?
- December 04, 2009 3 comments:
Email ThisBlogThis!Share to TwitterShare to FacebookShare to Pinterest
Labels: Daily life and other stuff
Newer Posts Older Posts Home
Subscribe to: Posts (Atom)

When I was a kid, I collected unicorn collectibles. I have no real idea why. I think it started when someone gave me one as a gift and I sai...